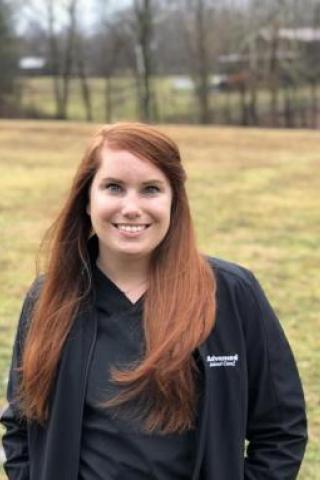 Dr. Hill was born and raised in the Northshore of Chicago, IL. When she was younger people would ask her what she wanted to be when she grew up and the answer was always “a veterinarian”. Her parents, who both worked in design and architecture, found it strange that their daughter was interested in horseback riding lessons and getting her own dog. Once she got to high school she got her first job in a small animal practice. This practice solidified her love for veterinary medicine and gave her the determination to attend a good undergraduate college and eventually apply for veterinary school.

In August 2008 she moved down to the very rural town of Murray, Kentucky and says “To say the least it was culture shock but in the best sense possible.” Just like she had fallen in love with small animal medicine, she began to fall in love with small rural farming communities and the veterinarians that treated anything that showed up at the door.

She graduated from Auburn University College of Veterinary Medicine in 2016. She went straight into general practice and has a special interest in animal dermatology, ultrasound and soft tissue surgery.

She shares her home with her 2 dogs Moog and Gracie Mae and also Guinness her 13 pound tuxedo cat. Outside of work she loves to cook and bake and says in another life she would work in a French bakery.