5 Puppy Housetraining Tips To Save Your Sanity

5 Puppy Housetraining Tips To Save Your Sanity

WARNING: NO COMPANY
Submitted by Anonymous (not verified) on 23 July 2020

How much do we love thee, puppies? Oh, let us count the ways. Puppy breath, silky fur, endless kisses, oh my! The one thing that every puppy owner dreads, however, is accidents. And those of us in the veterinary community will tell you, the only certainties in life are death, taxes, and puppy accidents. It comes with the territory!

We want everyone to know that when adopting or buying puppies because the last thing we want to see is those puppies being rehomed out of frustration due to accidents. As veterinarians, there are two things we’d love all puppy and potential puppy owners to keep in mind in regards to puppy care. You need to be available for frequent walks and it’s ideal if you’re around enough during those initial months to keep your puppy within sight much of the time. These two things are going to have a positive impact on the happiness of both you and your wee pup. There are also plenty of other things you can do to set your pup up for success when it comes to housetraining, and we share five of the best tips below. 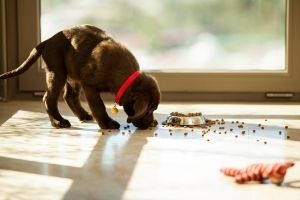 1. Take Control of Their Diets

You might not think of a puppy’s diet when it comes to accidents but it plays a crucial role in being able to housetrain. Feed puppies twice a day and allow them to free feed for a half hour. And what you also might not realize is that you don’t have to limit how much they eat, per se, but you do need to limit the time they have to eat it. If the puppy eats it all in five minutes and wants more, give them more. If they look at the food and make a face and walk away, the clock is ticking. The food will be picked up after a half-hour. They will quickly learn that the food will be there for a limited amount of time and potty schedules can be established.

Some vets will recommend three feedings. Whatever you choose, just make sure it agrees with your pup. And while we say that you don’t have to necessarily limit the food, diarrhea could indicate that your pup is eating too much or the food type is bothering them. You’ll need to gradually adjust this, as diarrhea obviously only adds to the challenges of housetraining. 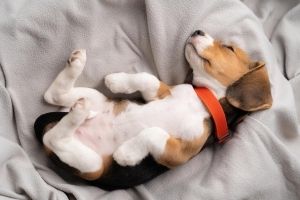 2. Craft a Schedule That Works For You and Your Pup

Not only does the feeding need to be on a schedule that’s intertwined with eliminating, but your puppy should also get used to going out shortly after playing and napping. Of course, if your puppy is sniffing around in between these times, hurry outside! Being a puppy parent means frequent walks so make sure you’re aware of that before making the commitment. And another tip would be to avoid feeding the pup an hour before bedtime and/or being confined to a crate.

As a general rule, keep in mind that you’ll have to take your puppy for a walk after the following activities:

Again, we realize this is quite the commitment, but the puppy snuggles and lifetime of love you’ll get from doggos make it well worth it, especially if you put the time in now to set them on a good path. Plus, all these walks are good exercise for you both! 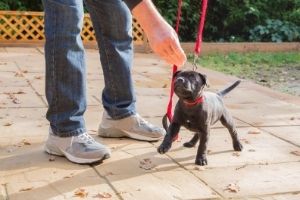 When a puppy has an accident, don't stick their noses in it or spank them. No one would argue the fact that you do not haul off and smack an infant for soiling their diaper, and the same principle applies with puppies. Take them to the spot and say, “No!” in a firm voice. Pick up the feces or urine-soaked paper towel. Take the puppy and the mess outside and place it on the ground and act as if the puppy had just relieved themselves on the grass. Make a big deal and give them a favorite treat. For better or worse, most pups are food motivated, so this is the key to success! Any time they go outside, reward them immediately. Don’t wait until you get inside.

If you walk in on your puppy in the middle of having an accident, resist the urge to yell. We know it’s not easy! What you don’t want to do is frighten them but you do want to make some sort of noise, such as a clap or a stomp on the floor. Help your puppy to finish going outside if it’s possible. Cleaning up any accidents thoroughly and removing any odors from carpeting or bedding as best you can is crucial, as remaining smells can impede their progress. 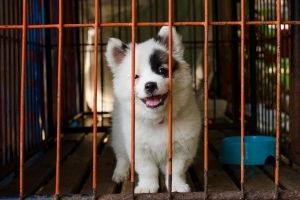 4. All Hail the Crate For Potty Training

First and foremost, if you’re one of those people who has a negative association with this, you need to get over the guilt of enlisting crates for training with dogs. They make dogs’ lives easier and more manageable. That being noted, crate training a puppy isn’t recommended until they have reached at least 12 weeks of age, as their sphincter muscles are not strong enough to hold urine or feces for more than 2 hours. The point of crate training is most dogs will not soil an area that they have to sleep in. If they cannot hold it and soil their cage, it will ruin that concept and make potty training that much more difficult.

When the puppy is old enough to crate train, you can keep adjusting the size of the crate (at least most crates allow for this) to accommodate them. When the pup gets the urge to “go”, they will let you know by whining or scratching in order to get out of their little home. Be swift in letting them out, as you do not want to leave any room for them to think it’s ever okay to go in their crate. Even worse, that could also let them think that they can do the same in other parts of your home. 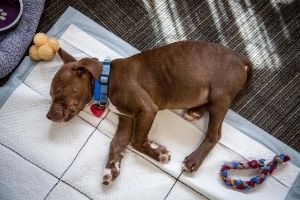 This is a controversial one as it can seem like you’re hedging your bets. Your message to your dog is that they should only go outside but puppy pads give them an indoor option. We get that these are mixed messages but, as veterinarians, we also understand that you may have to work outside the home while raising a puppy. Or you may get a puppy during the wintertime when it’s much more challenging to get outside. Or both! Puppy pads give you the option to allow the puppy one spot within the home to make it if they are about to have an accident. You can work on being stricter about this as the puppy matures.

You are inevitably going to experience setbacks, plateaus, and perhaps even regression while trying to potty train your pup. Don’t give up!

Some common potty training mistakes we hear about as veterinarians are as follows:

When it comes down to it, the key to housetraining puppies is patience. It does take some time. However, if it’s been a few months and your pup is showing little to no progress, we can help you find a local vet! Go forth and train—you’ve got this!