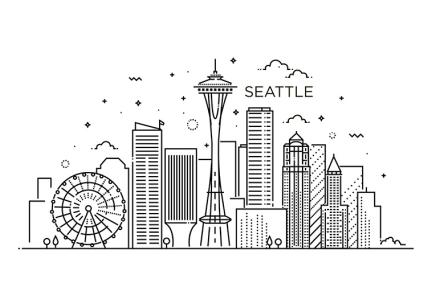 Pets are really important to us here in Seattle and we have a very special connection to every veterinarian in Seattle.

Seattle is a very pet-friendly city. The population loves both cats and dogs. They aren’t just considered to be animals, they are members of the community. Seattle citizens, businesses, and institutions recognize this and take extra steps to accommodate the city’s furry residents.

Local Seattleites are known for their high tolerance for rain and love for coffee. They take pride in the natural beauty of their city, which tends to inspire a broader interest in protecting the environment. Residents love their city and prefer to support local businesses and artists to help maintain Seattle’s unique character.

Seattle’s biggest claim to fame might be the many companies that have been born in the city. Microsoft, Amazon, and Starbucks all come from Seattle. The city is also the birthplace of bands like Nirvana, The Jimi Hendrix Experience, Pearl Jam, and Soundgarden. Seattle is also known for its rain, with rain falling more than 150 days a year on average.

The economy is driven by aerospace, tech, and healthcare. The biggest employer in the city is Boeing, with Microsoft, University of Washington, and Providence Health following behind.

While Washington has laws that ban the ownership of large and dangerous exotic pets, that still leaves room for plenty of animals. The city is home to the only Exotic pet clinic in the American Northwest, Bird & Exotic Clinic Of Seattle. This makes Seattle the best place in Washington to raise a happy and healthy exotic pet.

Since the city of Seattle loves pets they also have laws to ensure that pets are taken care of and integrated into the city. Here are some city ordinances and regulations you should know:

All dogs, cats, potbellied pigs, and miniature goats must be licensed.   All pets, aside from cats and birds, must be on a leash. This law doesn’t apply to specifically designated off-leash areas.   No more than three small animals can be kept on a property that is smaller than 20,000 square feet.   Small animals include dogs, cats, miniature goats, and potbelly pigs.   Dog owners must clean up after their dog when traveling through public property.   Washington holds dog owners strictly liable for the actions of their dog. This means that if a dog bites a person or another dog then the owner can be held liable even if the owner believes they or their dog aren’t responsible.

If you really want to become a true Seattleite then you need to adopt a pet from one of the local shelters. Seattle isn’t just a pet-loving city, it’s also a city with a deep concern for animal rights. You can find your new best friend at one of these locations:

The city of Seattle and the surrounding area are filled with plenty of great places to take your dog for a walk. Here are some of the best:

The Seattle Parks and Recreation department have created a webpage where you can look at all of the off-leash areas in the city and learn more about the rules and regulations. It’s a great resource for finding the nearest park where you can let your dog run free.

The people of Seattle love pets and they love to party. It only makes sense that they’d combine these two passions by creating a variety of events to celebrate their pets. Highlights include the Halloween Pet Parade, Yoga With Cats and Bark at the Park. There are many large and small events throughout the year, so check out websites like this one to see what’s going on any given weekend.

Seattle is the largest city in Washington, with an estimated 724,000 people living within the city limits and around 3.5 million people living in the greater metropolitan area. The city’s cutting-edge companies have created a highly educated and well-paid population. But this growth hasn’t been without issues. The city is hemmed in by the water, with limited room for expansion. This means that housing prices are high downtown. It’s common for people to live outside of Seattle and commute into the city for work and recreation.

To learn more about Seattle, visit:

Here in Seattle, we love our pets! Seattle is located in the northwest of Washington state, on the eastern bank of the Puget Sound. The weather in Seattle is defined by the rain. An average of 37 inches of rainfall in Seattle every year. That rain is spread out over the course over an average of 152 rainy days. The rain is concentrated in Fall and Winter, with Summer bringing drier days. The city has a temperate climate. The average annual temperature is 52°F. On the extreme ends of the spectrum, average highs reach 72°F in July while average lows reach 36°F in January.

Seattle is home to iconic locations like the Space Needle, Pike Place Market, and the Great Ferris Wheel. Sporting events are big in the city, with the Seattle Seahawks and Sounders FC playing at CenturyLink Field and the Seattle Mariners playing at Safeco Field. Educational destinations include the Seattle Art Museum, Pacific Science Center, and the Museum of Flight.

Seattle is a highly urban city, but it is fairly unique in the way that the environment has been integrated into the city. There are estimated to be around 6,340 large trees in Seattle, with trees covering an estimated 28% of the city according to a 2016 study. It’s a beautiful city that attracts a high concentration of environmentally-minded individuals.

The biggest event in Seattle is probably the Bumbershoot festival on Labor Day Weekend. The event draws some of the biggest acts in music and comedy. The Penny Arcade Expo is one of the country’s biggest gaming conventions, and it also takes place over Labor Day Weekend. The city’s waterfront character is put on display during Seafair. The event lasts from June through August, but the crowning event is the Seafair Weekend Festival. The hydroplane races are a Washington favorite.

The major industries in Seattle are Clean Energy, Aerospace, Defense, and Life Sciences. Companies in the area are usually both high tech and environmentally minded.

Seattle is the birthplace of companies like Microsoft, Amazon, Boeing, and Starbucks. Boeing is the city’s largest employer, providing work for around 80,000 employees. The University of Washington has around 25,000 employees working to provide an education for 48,000 students.

Seattle’s nickname is The Emerald City, inspired by the many green trees within Seattle’s limits and across the state. The unofficial symbol of the city is the Space Needle, which is probably the most iconic part of the Seattle skyline. The city bird is the Great Blue Heron. The city flower is the dahlia. The city’s flag and seal both contain portraits of Chief Sealth, the native American leader whose name inspired the city’s.

Find the top veterinarians in every city in Washington