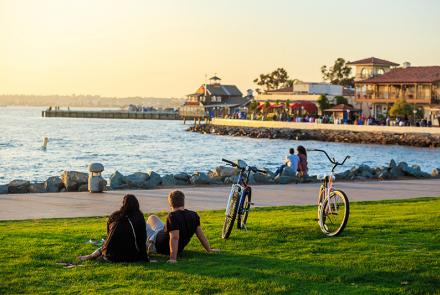 With its acclaimed beautiful weather throughout the year, San Diego is a great hometown for the outdoorsy type of family - and family pet! Many people choose to retire here, but the population trends relatively young, with about 50% of San Diegans being younger than 35 (San Diego, California, Encyclopedia Britannica). Children are roughly a quarter of the population here, and this city finds itself ranking well on “family-friendly location” lists frequently.

Along a similar breakdown, only about half of San Diego households include pets: 21.3% have dogs, 15.5% own cats, and 9.2% of homes include both dogs and cats The pet-owning households break down as follows: 21.3% own dogs only, 15.5% own cats only, and 9.2% own both dogs and cats. Though the cost of housing (including pet-rental fees and homes with yard space) may contribute to the fact that fewer than half of San Diego’s households include dogs and cats, the city is also considered incredibly dog-friendly. You can find parks, beaches, hiking trails, and even restaurants that welcome dogs right along with their families.

Dog park options include off-leash areas, some of which are open 24 hours a day. And with so many miles of coastline, dog beaches are available, too. Visit the City of San Diego’s website for leash-free dog park locations. Here, you’ll also find important information about health recommendations, such as protection against rattlesnakes and ticks. Additionally, you’ll want to know about poop-scoop, vaccine, and license requirements before your dog park visit.

Other pet-friendly activities include dining out. There are actually hundreds of San Diego-area restaurants that welcome pets; the mild-to-warm climate allows for plenty of outdoor dining spaces where dogs can join in the family meals. Restaurant reviews and descriptions can help you decide what’s for dinner: click here.

Want to celebrate pets and contribute to pet-related causes with fellow San Diegans? Events like the annual San Diego Humane Society Walk for Animals, as well as monthly meet-ups, holiday paw-ties, and DogFest San Diego can get you involved in socializing and giving back. Calendars like this one can keep your pet events schedule organized.

Before you head out with your 4-legged San Diego sidekick, be aware that you must:

You can find more details about pet ownership laws from the County of San Diego Department of Animal Services.

Ready to adopt a pet in San Diego? You may be in search of a new kitten, a purebred dog, or anything in between. Your new best friend could be waiting for you at:

For more information about the city of San Diego, visit:

Business Associations and Chambers of Commerce

San Diego is located in Southern California, right on the Pacific Coast. San Diego is widely known to have perfectly pleasant weather year-round, including plenty of sunshine and consistently mild temperatures. Its beaches and deserts provide plenty of picturesque, rugged landscapes to explore and enjoy.

In your downtime, take up golf, skateboarding, surfing, or hiking - all available in “America’s Finest City". The world-famous San Diego Zoo partners with zoos and conservation organizations all over the globe to foster a love for animals and the initiatives needed to preserve wildlife everywhere.

In San Diego, you’ll find a unique mixture of urban, suburban, and beach town vibes. The thriving downtown area boasts offices, convention centers, and nightlife, while there are plenty of quiet neighborhoods - all within nearly arm’s reach of the Pacific Ocean. Each of these settings contributes to San Diego’s annual Restaurant Week. Generally, nearly 200 establishments participate in this prix fixe dining event, showcasing the best that San Diego chefs have to offer. Offering much more than fish tacos (which are amazing!), San Diego is fast becoming a culinary hub.

A gem of Southern California, San Diego’s tech employment opportunities and military sector make this city a great place for young professionals and families to call home. Marine Corps Base and Marine Corps Air Station Camp Pendleton and Naval Base Point Loma are just two of the active-duty community focal points in the area. San Diego also offers several options for higher education, including a campus of the University of California and the UC School of Medicine. In fact, San Diego has one of the highest college graduation rates in the U.S. (San Diego, California, Encyclopaedia Britannica). You can study law, business, and oceanography. And having broken many records for tourism, ranking in the top five cities for life sciences and biosciences, and having been nominated as the best city for start-ups, it's safe to say that San Diego's economy is booming.

In 1542, Europeans arrived in the area that would become San Diego, California, and in 1602, the Spanish named the city for the monk San Diego de Alcala de Henares. Steeped in history, the city lies just at the border between the U.S. and Mexico, and in fact, was under Mexican control as a pueblo. Eventually, California became part of the United States in 1846, and the growth of the city was spurred by the Santa Fe Railway (San Diego, California, Encyclopaedia Britannica).

The city’s motto is “Semper Vigilans", which is Latin for “Always Vigilant". The city seal pays homage to San Diego’s seaside position, historical Spanish settlement, and place in the Golden State. You can see an image of the seal at the San Diego government website.

San Diego is home to nearly 1.5 million people, as of the 2010 census. The city population may reach nearly 2 million people by the year 2050

Find the top veterinarians in every city in California